Check out that photo above! That was captured in Sullivan’s Island in South Carolina on November 3, 2013 during a partial solar eclipse. They’re saying it looks like the sun is dripping into the ocean, and I can see that - but I also think it looks like a dolphin that has surfaced and is diving back into the water. Breathtaking!

This Thursday, October 23, 2014, the moon will get between the earth and the sun, and for a brief time, nothing else will seem to matter to those fortunate enough to catch a glimpse of this phenomenon. As Slooh astronomer Bob Berman so eloquently put it, “It takes us away from our mundane things, our problems in the world, whatever it is, to see the grander picture. I don’t think anyone of any age tires of that, something beyond ourselves, so it’s a nice marriage of science and nature and beauty.”

It is a partial solar eclipse that we will see on Thursday afternoon/evening, so only a portion of the sun will be obscured - probably roughly 80% at most. Here’s a map from AccuWeather.com that shows the best viewing times and places:If you are between the red and orange lines, you’ll see the very beginning of the eclipse as the sun is setting. Those of you who are located between the orange and yellow lines will see the eclipse as it reaches its maximum point, but you’re going to miss the end of the event. If you’re west of the yellow line, good for you! You will have the opportunity to see the entire partial solar eclipse before the sun sets in your region. Of course, weather and sky conditions will affect visibility, so Slooh (along with a partner observatory in Prescott, Arizona) will be broadcasting the event here. I would encourage you to check it out. It’s going to be magnificent wherever you are.

Phil Plait is the writer of Slate’s Bad Astronomy blog and he emphasizes the importance of protecting your eyes while viewing the partial solar eclipse on Thursday. Here’s a snippet of his advice: (This is important - and I don’t know how many of us would have thought of it.)

NEVER LOOK AT THE SUN WITHOUT PROPER FILTERS. You probably won’t do severe or permanent damage to your eyes by looking at the Sun with your eyes alone, but I’d advise against it (especially for younger children, who have clearer lenses in their eyes that let through more damaging UV light). AND DON’T EVER EVER EVER LOOK AT THE SUN THROUGH A TELEPHOTO LENS, BINOCULARS, OR A TELESCOPE without proper filtration, and honestly, unless you really know what you’re doing, just don’t do it.
You might think sunglasses are OK, but they’re generally not. They can make it worse; they block visible light from the Sun, so the pupil in your eye widens. That can let in more harmful UV and infrared light.

In his post about Thursday’s eclipse, Plait also shares a link to his photo gallery from the solar eclipse in May of 2012. The pictures he compiled from eclipse viewers are stunning and amazing - take a minute to check them out and maybe be inspired to do a little SAFE photography of your own on Thursday. Here’s a spectacular shot of a partially eclipsed setting Sun as seen from Dallas, Texas on May 20th, 2012. 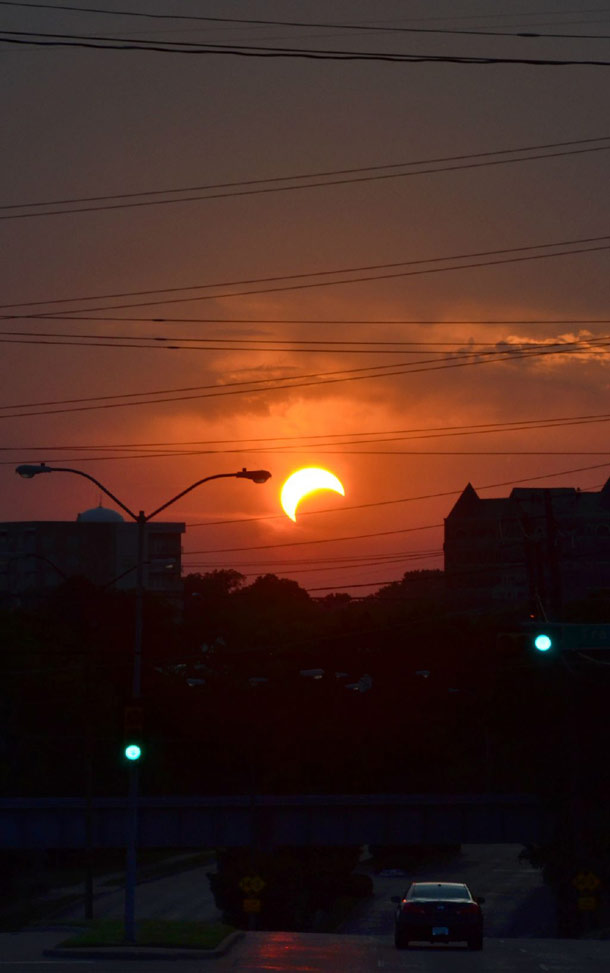 As a charging technology company that has somewhat recently begun using the sun’s energy to power some of our products, we are fascinated by the burning star that gives light and life to our planet. We would love to see any photos you take, as well as read any stories you’d like to share about your experience with the partial solar eclipse this week.